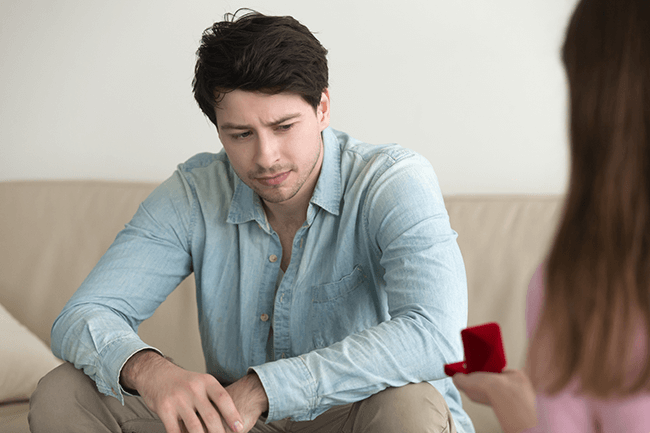 As a student and marriage scholar, I have been fascinated by the attitudes so many young adults hold about marriage.

My thesis is on that very topic.

I have taken particular interest in the increasing delay of marriage we see among young adults today.

According to the US Census Bureau, the average age at first marriage for men is 29 and 27 for women, and it appears this continues to increase.

So what is behind this increase in age?

Some might say young adults are just being smart because they are more mature at those ages. There appears to be some fears about marriage that suggest that many young adults believe that marrying at younger ages is simply irresponsible.

While the fears we have about marriage are often different and come from different places, research has revealed some common fears about marriage that are prevalent among young adults today.

While these fears are often based on valid concerns, they also drive many relationships to a less than satisfying end and a delay in one of the most rewarding life experiences.

So what are these common fears and are they realistic?

Fear of Commitment and Fear of Being Dependent

It is not uncommon to hear something along the lines of “I am not ready to get married because I am not done being single.”

One deeply rooted fear that drives this thinking is the fear of losing the sense of independence we have while single.

After all, once you are married you have to spend all your time with your spouse, you become boring, and you have to be serious about life.

Underneath this desire to be single is a very realistic goal of many young people: to have the freedom to explore who we are, what we believe, and what we want to do with our life.

Research suggests that today’s young adults are presented with many such opportunities for growth and “expanding their horizons” and this is usually a good thing.

However, the need to be single in order to best explore options is not necessarily true.

While being single does make travelling a little easier, or allows a little more flexibility in finding work, “expanding your horizons” may also be more limited when single.

The allure of being single is real, but the opportunities for growth may actually be enriched when sharing them with another.

Can you imagine, instead, going to Europe with a spouse and being able to share different perspectives of the experience rather than just being limited to your own?

Research shows that “independence” is not the most fertile ground for life fulfillment.

Rather, interdependence, or two people depending on each other, has been shown to lead to the greatest fulfillment.

Unlike a child dependent on parents for all their needs, or a single person being limited by their individual weaknesses, interdependence allows us opportunities to use our own strengths but also benefit from the strengths of others.

Such interdependence is no more likely to happen in any other relationship than marriage.

What is fear of decision?

Fear of choosing and choosing wrong.

While Hollywood makes it seem like we all have that one “right” person out there for us, this is only a romantic fairytale.

Research suggests that those who think they have found the right person are actually more likely to later regret their decision and seek divorce.

While finding someone with whom you are compatible is certainly important for increasing your chances of a successful and happy marriage, we should not limit ourselves to “right” and “wrong.”

Chances are, if you are looking for the “right” one you will find it easier to come up with a reason why a current partner is the “wrong” one.

True commitment in relationships, the type of commitment required for marriage, does not come from choosing the right person.

The choice is not even between the “wrong” or “right” person.

The choice is whether or not you will commit to making the person you are with the right one and commit to becoming the right person for your partner.

Commitment is the choice!

This requires a leap of faith in your partner, but if you have taken the time to truly get to know him or her and have established a deep sense of trust with each other, then you are headed in the right direction.

And if you cannot commit, consider what is getting in the way of making that choice and decide if the relationship should continue or not.

What is fear of inadequacy?

The fear of not being good enough.

One of the most common fears addressed in recent research is the fear of not being ready to marry.

This fear leads many to lose very good and promising relationships, or avoid relationships to begin with. All in the name of “I’m not ready.”

Most marriage scholars would agree that a certain degree of preparation is important to increasing your chances of having a rewarding marriage.

You can read some of my other blog posts to see that I would agree. But underlying this fear is a misunderstanding of what it means to “be ready.”

Some lessons in life, some skills, cannot be learned outside of the context of committed, long-term, romantic relationships.

This means that some things you will not learn until you are married.

If you cannot be ready for marriage until you marry, what can you do? First, realize that being “ready” for marriage does not mean you have a certain skill set. Rather, being ready means you have developed the ability to try to make things work. If you are at least willing and able to make the effort to keep your marriage happy and stable, you are more ready than you might think.

Indeed, you are more ready than many on their wedding day.

With a 50% divorce rate in the United States, this fear is very understandable.

Whether it is our own parents or those of a friend, we have all been affected by divorce in some way.

So many now ask “what’s the point?”

If marriages just end, then why get married? Can marriage really last?

If we were to take a glass-half-full approach we would quickly realize that 50% of marriages do not end in divorce, and many of those marriages are happy.

How do I overcome my fear of divorce?

If there was a way to ensure that your marriage would not be the one to end, would that remove your fear?

While science cannot give us one single way to guarantee any marriage will last, there are certainly things you can do to make it less likely.

1. Eliminate Divorce from Your Options

Fear of the thing often leads to the thing happening, so if you go into marriage with the goal of making it last, then your chances are already much improved. This is a form of self-fulfilling prophecy.

It is all about developing true connection with a potential spouse.

A relationship founded on physical passion and obsession, alone, will not likely last beyond the first year of marriage.

Once the feeling is lost, there is often no relationship left as the roots of the relationship wither and die.

The most successful marriages sprout from relationships that are fertile ground for growth. These relationships are characterized by trust, intimacy, connection, and loyalty, not the steaminess of the sex.

3. Commit to Your Relationship

Jump in with both feet.

Once you do make the choice to marry, trying to keep one foot out the door will ultimately result in failure, whether it be in the form of an unhappy marriage or an unhappy divorce.

So when it comes time for you to make a decision about getting married, don’t let these common fears keep you from the greatest happiness you may ever know.

But fear is not the answer.

Try taking our READY Assessment to help you determine which fears may be holding you back the most from forming happy relationships. Or take our RELATE Assessment to see if you and your current partner are ready to navigate the waters of marriage fearlessly.

1 thought on “Afraid of Marriage? [5 Reasons Why You Shouldn’t Be]”